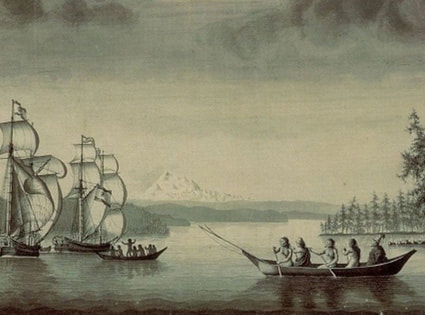 Inhabited by native groups since ancient times, Alaska has seduced explorers, scientists and adventurers. In the late eighteenth century, Spanish explorers fell under its spell. For nearly twenty years during the Enlightenment, the Spanish Crown launched a series of expeditions to the northwest Pacific coast.

In geographical terms, these explorers sought to find a northwest passage that would join the Pacific with the Atlantic coasts. In geopolitical terms, they wanted to ensure that Russians and other European explorers did not settle in territories Spain considered hers. In scientific terms, Belén Bañas Llanos says, “the Spanish scientific expeditionaries took their knowledge in their ships,” and created astronomical observatories, chemistry laboratories, as well as collections of minerals, flora and fauna in the overseas colonies.

1774. On January 24, Juan José Pérez Hernández set sail from the port of San Blas aboard the frigate Santiago. On July 21, he contacted the Haida Natives of the Langara island, who had never before seen Europeans.
1755. An expedition led by Bruno de Hezeta and Juan Francisco de la Bodega y Quadra crossed Vancouver and the Alexander archipelago. The explorers sighted Mount St. Elias and Kruzof Island in the Gulf of Alaska.
1779. Ignacio de Arteaga and Juan Francisco de la Bodega y Quadra explored the Kenai Peninsula and the island of Kodiak.
1788. An expedition led by José Esteban Martínez and Gonzalo López de Haro set sail from San Blas. Visiting the westernmost point of Alaska on Unalaska Island, they were the first Spaniards to contact Russians settled in Alaska. During this journey, they encountered Russians and English who wanted to settle permanently in the Nootka Sound area, which would later become part of Canada.
1790. Francisco Eliza, Salvador Fidalgo, and Manuel Quimper sailed to Nootka Sound in an attempt to pre-empt Russian and English occupation plans and establish the Santa Cruz de Nuca settlement and San Miguel fort. Cordova and Port Valdez in Alaska were named after the discoveries made by this expedition.
1791. Alejandro Malaspina and José de Bustamante y Guerra arrived at the coast of Alaska with a scientific expedition composed of navigators, scientists, and artists. This journey had political purposes as well, as it sought to map the defense points and the settlements of other European powers in the area.
1792. An expedition commanded by Dionisio Alcalá Galiano and Cayetano Valdés circumnavigated the Vancouver Island for the first time. That same year, the ship commanded by Jacinto Caamaño spotted the northern area of Nootka Sound and named the Revillagigedo Channel. Another expedition led by Juan Francisco de la Bodega y Quadra ventured out to sea, aiming to continue his botanical and ethnographic research. From his findings, the explorer wrote the work Noticias de Nutka (News of Nootka.)

These expeditions left as a legacy some names that survive to this day, such as Revillagigedo Island, Malaspina Glacier, Heceta Island, Bahía del Desengaño, Valdez, and Cordova.